Many of you have been hearing horror stories about Abidjan's cost of living. Since I am but one person, who hasn't been here very long, I figured I'd start asking other people about their expenses. B is an Ivorian American living in Abidjan. She is in Abidjan temporarily and was kind enough to share her budget with us.

Phone: It varies really. I don't do a lot of talking on the phone, most communication happens via text message which if you get a specially offer, you get free texts every month, I'd have to find out exactly what that "forfait" was called. I usually recharge my phone every week for about 5-10,000 CFA which is between $10 and $20.

Leisure: It usually includes food ie going out to lunch or dinner with people, that's where I spend the bulk of my money. I'd say at least $50 a week, which is spent on most weekends. I was talking a dance class but it was really expense for my taste, about 8,000CFA a class, which is about $16 a class. Going to the beach, which I seldom do costs about 1000CFA in transport if you take a Baca [those minivan buses that are a form of public transportation here], which is pretty cheap. On the other hand if you take a cab, you can work out a deal with the cab driver for 22-25,000CFA for the day to drop you and pick you back up when you're done, which is about $50.000.

Most unexpected expense: Definitely transportation, we don't have a car so every time I go to work or out anywhere, I have to take a cab, which to work, round-trip is about $8 and that's not including any trips to the grocery store, the market or to visit friends or family.

What financial advice would you give to someone coming?
I would say expect to pay more to find good housing in a good neighborhood. I live in Deux Plateaux Vallon and there is always something going on. There are lost of food place, bars, bakeries and shopping markets. Stick to a monthly budget and if you can, GET A CAR! Expect to haggle for certain things even though you may still get ripped off as a foreigner. Lastly, Abidjan can be cheap if you know how to budget and plan but I've realized that it's sometimes as expensive as living in the States. Oh, also, be prepared to pay tips and bribes to be able to get things done as they should and on time. Sometimes it takes a little "convincing" to get things done that I would never have to deal with in the States. Almost forgot, paying for security ($40 a month) and gardening services ($60 a month).

Is there anything you feel particularly lucky to not have to pay for here? Hmmm...car insurance? Instead of paying for heat during the winter months, it's the air conditioning that has to be paid for because of the heat.

Is there anything that people spend way too much money on here?
Hmmm probably transportation I would say and food.

So here is a recap of where B's money goes: 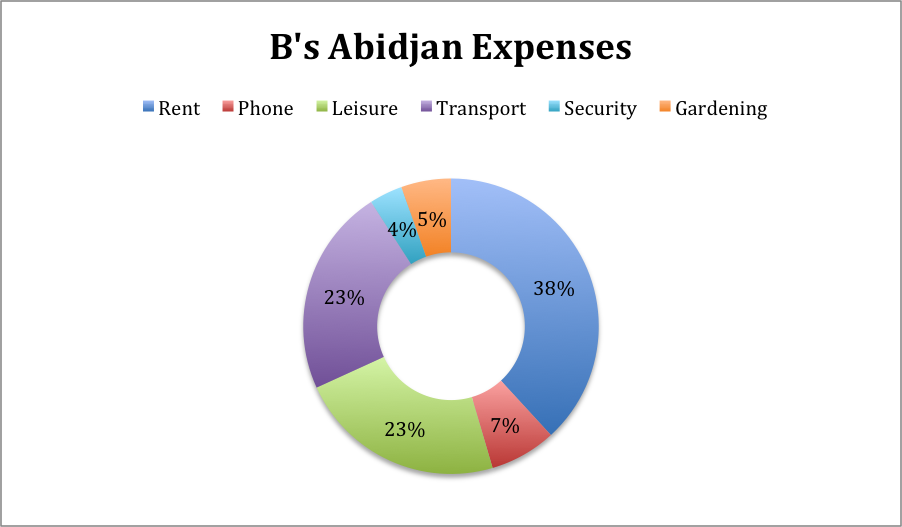 P.S. I heard some of you were having issues with the comment box. Just click on the No Comments to post your own comment/questions. Sorry for the poor ergonomics -- praying I'll be able to fix it soon!